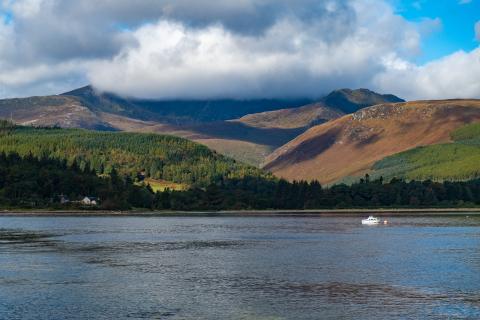 Felling of nearly half a million larch trees on the Scottish island of Arran in due to commence next month in an effort to combat the spread of the tree disease Phytophthora ramorum, and will take several years to complete.

P. ramorum was first discovered in Scotland in 2002, is fatal for larch and no effective treatment currently exist. Felling the trees surrounding an outbreak is the only way to control its spread.

The regulatory agency Scottish Forestry has been working with the public body Forestry and Land Scotland on how to tackle the disease.

Forestry and Land Scotland have been running the "Keep it clean" campaign to highlight that visitors to forests can spread diseases on muddy boots, paws and tyres and asks everyone to wash mud and debris off shoes, bikes, toys and equipment before visiting new areas.

[image of Arran coastline, by danielmanastireanu at Pixabay]