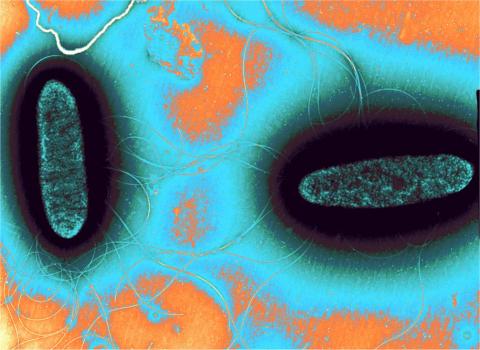 Blackleg disease of potato caused by P. atrosepticum (Pba) is the most damaging bacterial plant pathogen in the UK, costing £50M p.a. in losses for the potato industry. Current knowledge assumes that disease is caused through Pba-infected seed tubers. However, our recent unpublished data have shown that under high soil moisture following irrigation, disease appears in plants grown from pathogen free seed (minitubers). The most likely explanation is that bacteria enter the plant and cause disease directly from the soil; something not previously considered. We have also shown that Pba is able to colonise roots of other plant species (including crops), possibly as natural rhizosphere-dwelling saprophytes in the soil. In pot trials with Pba alone, we showed there was no movement of Pba from soil into the plant. However, when free-living nematodes (FLN) were added to soil, a 100-fold increase in Pba in stems occurred.

Through these and other findings we now have the potential to make a step change in how we manage blackleg. We will address knowledge gaps firstly by using Light Sheet and Confocal Laser Scanning microscopy, transparent soils and mesocosm studies to assess the role of FLN as vectors of Pba and how infection occurs. We will also examine how changes in standard irrigation regimes can help to reduce levels of blackleg in ware crops (where irrigation is often over-applied to avoid common scab disease that occurs in dry conditions), and how it might change FLN communities around potato root systems. Similarly, we will identify cover crops that limit natural Pba colonisation on their roots as a possible way to reduce Pba numbers in soil prior to planting potato. Little is known about the microbiome on potato roots and how these might be influenced to favour or reduce colonisation by Pba. We will therefore characterise the potato microbiome prior to and following irrigation using shotgun metagenomics sequencing and the latest bioinformatics tools, with a focus on the Pectobacteriaceae and wider Gamma-proteobacteria. We will also use GC-MS to examine how changes in root architecture and the constituents of root exudates influence the composition of these bacterial groups, to assess whether the use irrigation and cover crops alter the balance between beneficial and harmful bacteria associated with potato. Finally, we will determine whether novel antimicrobials (bacteriocins) in closely related non-pathogenic bacteria in the microbiome could act as a management option against Pba.

Our recent modelling research using the Scottish Government’s in-house potato inspections database (SPUDS), shows that blackleg incidence on a national scale does not occur randomly but in clusters. Reason(s) for this remain unclear but could be due to several things that, when identified, may assist growers in managing their crops, e.g. potato crop distribution, weather, soil type, soil moisture, leaf wetness, FLN distribution, crop type and rotation prior to planting. Using data generated from this project, an extensive array of data from other recent and historical investigations and the latest data from government and industry we will model, using innovative machine learning methods, at national scale these data to identify trends and drivers of Pba incidence in both space and time and, through this, produce predictive models to support development of a set of decision support tools for evaluation by stakeholders during the project and early adoption thereafter. Further, through scenario testing, we will quantify the predicted effects of climate change on future blackleg incidence in association with FLN presence thus providing the industry with robust and novel data to underpin sector resilience planning.

The project is led by the James Hutton Institute with academic partners from NIAB-CUF and the universities of Dundee, Durham, Glasgow, Newcastle and Strathclyde, industry partners Bayer Crop Science, SA Consulting, Scottish Agronomy, Soil Essentials and Scottish Government through SASA. AHDB will play an important role in the project’s knowledge exchange through its Farm Excellence Platform.

For more information about the initiative visit here