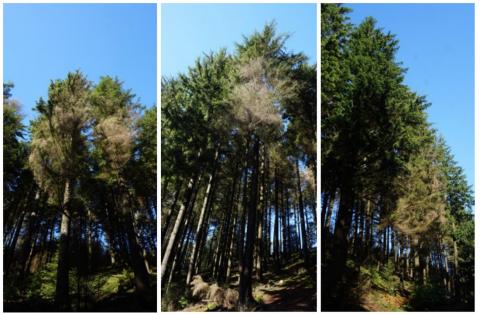 Scottish Forestry have confirmed a second finding of Phytophthora pluvialis in Scotland, a tree disease that is capable of affecting several tree species, including western hemlock, Douglas fir, tanoak and several pine species (particularly radiata pine).
The second location is at a woodland site near to Loch Awe in Argyll, and was picked up by ongoing surveillance.
P. pluvialis was first found in Cornwall in September 2021 and has since been found in Devon, Cumbria, Wales and near Loch Carron in Scotland.
The Scottish forestry news release about the finding can be found here.
The P. pluvialis webpage has also been updated, and is the central point for information on P. pluvialis in Scotland as the situation develops.