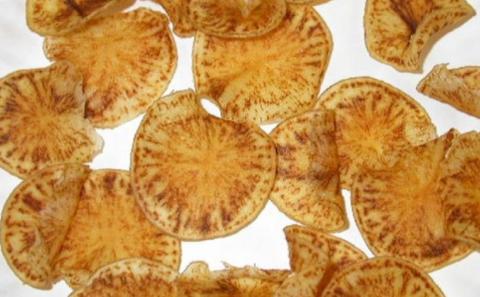 Abstract ‘Candidatus Liberibacter solanacearum’ (CLso) haplotype C, a bacterial pathogen transmitted by the carrot psyllid Trioza apicalis, causes yield losses in carrot production. Due to concerns that this pathogen might also threaten potato (Solanum tuberosum) production, the occurrence of CLso in cultivated and volunteer potatoes in Tavastia Proper and Satakunta regions of Finland was studied. Volunteer potato plants were found in 13 of the 27 inspected carrot fields. Of the 148 potato samples tested by PCR, eight volunteer potato plants and one cultivated potato grown at the edge of a carrot field were found to be CLso positive. The PCR products obtained from these potatoes with primers OA2/OI2c, LpFrag4-1611F/LpFrag4-480R and CL514F/ CL514R all showed 100% sequence identity to CLso haplotype C. This is the first observation of CLso haplotype C in field-grown potatoes. In addition, transmission experiments were performed. Attempts to transmit CLso into potato with carrot psyllids were not successful; however, CLso haplotype C was transmitted from infected carrots to potato plants by leaf grafting and by phloem connection formed by dodder, a parasitic plant, and found to survive in the potato plants for several weeks after transmission. However, the bacterial colonisation progressed slowly in the potato phloem and the amount of bacteria detected was low. The plants produced from the daughter tubers of the CLso-positive potato plants were all CLso negative, suggesting that CLso haplotype C was not able to pass to the daughter plants. None of the CLsopositive potatoes inoculated in greenhouse or collected from fields showed symptoms characteristic of zebra chip disease, associated with CLso haplotypes A and B.