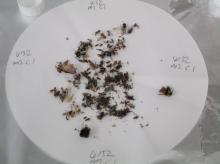 Xylella fastidiosa is a bacterial disease, transmitted between plants by xylem-feeding invertebrates. It has been estimated that, in the UK, approximately 20 xylem-feeding insect species could potentially vector Xylella, including those in the family Cicadellidae (leaf hoppers), and the superfamily Aphrophoridae (frog hoppers/spittlebugs). Little is known about the distribution or ecology of species in these groups within the UK, meaning that we lack information about how the presence and density of vectors varies between habitats. For this project, we screened and attempted to morphologically identify existing invertebrate samples for Auchenorrhyncha (with a particular focus on Aphrophoridae), collected using malaise traps from across 78 secondary woodlands within well characterised agricultural landscapes in central Scotland and England in 2015.