Monitoring for BMSB in Scotland - Final Report and Policy Summary 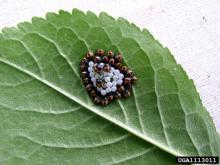 Co-ordinated monitoring for the presence of BMSB was undertaken by teams at SASA and the James Hutton Institute. To determine the presence and abundance of BMSB in Scotland, 10 trapping sites were selected based on their proximity to locations considered to be ‘risk points’ for introduction and ‘at risk’ for potential damage to industry. A reference collection of voucher specimens of common UK stinkbug species was established, including DNA barcoding. A process-oriented climate-based niche model was used by a team at SRUC to determine the areas in Scotland that are suitable for the establishment of BMSB under current and future climates. Scottish climate data was collected, and the model was used to assess the risk of BMSB becoming established both outdoors and within protected cropping environments.

Traps collected a substantial number of arthropods but no BMSB were found. The modelling suggests that, in Scotland, there would be a limited annual reproductive success under current climatic conditions in an outdoor situation. Climate change projections show that in outdoor environments in Scotland, BMSB populations would be unlikely to become established until the end of the century. However, temperature data from protected environments suggests that there is the potential for 2 or even 3 generations per year, depending on when BMSB is introduced.  The tendency of BMSB to congregate does make it more likely that Scotland could end up with small ‘clusters’ of populations, particularly if sheltering indoors over the winter months.

Recommendations and suggested 'next steps', including encouraging further surveillance, are detailed in the report and policy summary documents.