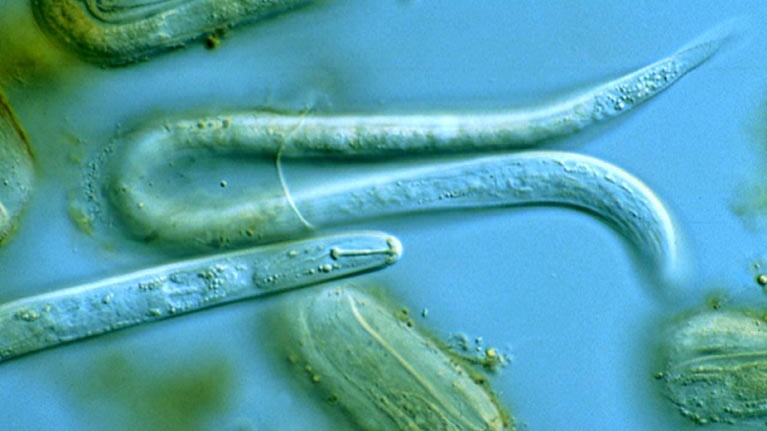 Potato is a very nutrient rich crop and so, not surprisingly, as well as it being a popular food for us, lots of other organisms also try to feed on it, either while plants are growing in the soil or during storage. These unwelcome visitors are carefully controlled by growers who try to reduce crop losses to a minimum. Even so, across Europe, somewhere between 15-25% of the potato crop may be lost to pest and pathogen damage.

Potato cyst nematode (PCN) is one such pest and is the scourge of potato production in many countries. Once present in the soil it can severely limit potato plant growth and yield, and is easily spread between fields either on plant material or machinery. Because PCN can remain dormant in the soil for decades, once land is infested it is very difficult to remove. The damage inflicted by PCN can be controlled using chemicals (nematicides), by leaving many years between potatoes crops (which is often impractical for commercial production) and/or by growing potato varieties that are resistant to infection. However, chemical control options have been much reduced in recent years by the removal of many types of pesticides due to concerns with human and environmental health. That leaves resistance as the main tool for reducing losses to this pest and, where it works, it does so very effectively.

In Scotland, we have two species of PCN – the golden (Globodera rostochiensis) and the white (Globodera pallida) potato cyst nematode. Varieties that are resistant to both species are available to growers but, while resistance to G. rostochiensis is available in ‘fresh’ varieties (the kind we buy in the supermarket, which are the type widely grown in Scotland), resistance against G. pallida is currently restricted almost exclusively to ‘processing’ varieties (those that go to make crisps and fries etc., that are rarely grown in Scotland as these varieties require a warmer climate and/or require to be transported outside the country to processing plants). What this means is that the options for Scottish farmers to grow PCN resistant varieties is actually very limited. To add to this, where resistance to G. pallida in fresh varieties is available, these have been slow to be taken up by supermarkets and consumers because of the myriad of choice in existing (PCN susceptible) varieties. The lack of G. pallida resistant varieties grown in Scotland has therefore led to a steady increase in the area of growing land contaminated with G. pallida, with few tools to control it. This has an important consequence for those growing seed potatoes since, by law, fields must be free from PCN before seed can be grown. Seed potatoes are those grown to be sold for planting the following season, rather than to be eaten.

Scotland’s potato industry is worth £250 million annually and produces 77% of the ‘seed’ for the £928 million GB potato industry, as well as exports worth £55 million. The concern is that if G. pallida continues to spread beyond the 13% of potato growing land it already infests, it will start to have serious consequences for seed potato production in Scotland with huge knock-on consequences for the economy and food security.

To deal with this threat, Scotland’s Plant Health Centre, on request from Scottish Government, formed a working group of over 50 people including Government, industry and academia representatives to work together to identify potential solutions and, more importantly, to find ways to put these solutions into practice as soon as possible. After many hours of discussion, a plan was agreed by all parties and a report produced. This plan includes a National Strategy for PCN control in Scotland going forward, where actions are clearly time-lined for implementation. Within the strategy, communication is key to ensure that everyone involved in the industry, from those that rent the land, to growers, distributors, supermarkets and consumers, understand the issue and work together to solve it. And everyone can help. For example, if you as a consumer had the choice between two very similar types of potato on a supermarket shelf, and you knew that one was G. pallida resistant and the other was not, by choosing the former you would be helping to save an industry, the jobs within it and local production, and therefore also helping to reduce the carbon footprint of production.

For more information on the PCN working group and the actions proposed, please go to our report on the Plant Health Centre website