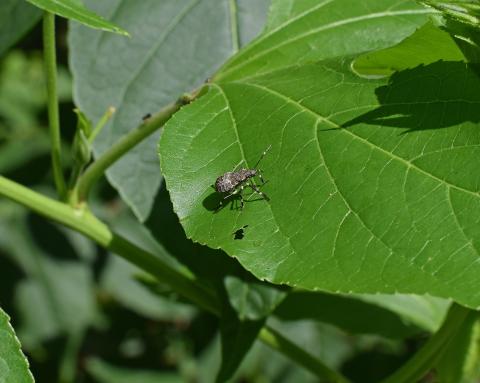 Even if it has not yet been detected north of the border, Scottish growers must take adequate steps to monitor growing areas for the brown marmorated stink bug (Halyomorpha halys), a new potential threat to the UK’s agricultural, horticultural and forestry industries.

This is one of the findings of new research into the risk posed by the bug, which has been intercepted several times at UK ports and has now confirmed to be present in the south of England. The bug can be found in every continent in the Northern Hemisphere including North America and mainland Europe and has a wide host range including soft and tree fruit, field vegetables, and ornamentals.

Scientists from the James Hutton Institute, Scotland’s Rural College (SRUC) and SASA (Science and Advice for Scottish Agriculture) placed sex pheromone traps at strategic points around Scotland, including near transport hubs and in soft fruit growing areas, to attract the bug if it was present, and developed a DNA fingerprinting method to help distinguish the bug from similar, less damaging species.

Fortunately, the bug was not found in any of the Scottish traps, however, by using climate modelling researchers have highlighted that plants grown in polytunnels may provide key areas for the establishment of the pest should it arrive, and therefore this should be the focus of continued monitoring.

Gaynor Malloch, a plant scientist at the James Hutton Institute and lead author of the report into the threat of the stink bug, said: “Under the current outdoor temperatures experienced in Scotland, it is unlikely that the bug could successfully complete a generation and become established as a pest if it remains outdoors. However, there is a possibility that it could establish if it were to spend some time indoors (e.g., in the winter months) as well as outdoors.

“If the bug appears, we would expect establishment to be slower in Scotland than the rest of the UK and there is, therefore, the potential to attempt eradication or to manage individual outbreaks carefully to prevent spread.

“Growers are already very vigilant when it comes to monitoring pests and diseases in their crops and we hope that they will keep a close eye out for this particular pest and report it to the authorities if suspected.”

The research has developed identification methods to enable a future diagnostic service to be provided, the logistics of which are currently in discussion. The results also provide data that looks at the potential of different locations to support a permanent population of the bug under current and future climates and helps to identify areas most suited for future monitoring studies.

The study was funded by the Plant Health Centre and the final report and summary of the research is available on our website.

*Update* There is a newly published BMSB fact sheet available on the Defra Plant Health Portal.  It is a very helpful guide that also shows you other UK native shield bugs that could easily be mistaken for BMSB.