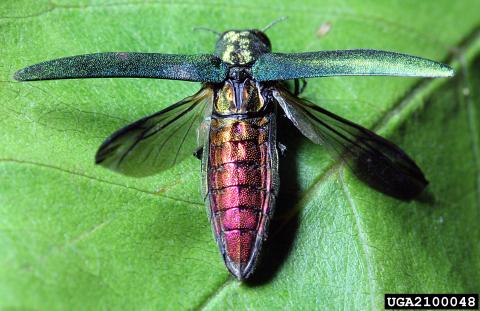 In October 2019, the NPPO of Ukraine informed the EPPO Secretariat of the presence of Agrilus planipennis (Coleoptera: Buprestidae - EPPO A2 List) on its territory. In June 2019, A. planipennis had been suspected in the Luhansk region, but official surveys did not confirm previous observations made by scientists (EPPO RS 2019/135 and 2019/156). From the 12th to the 13th of September 2019, additional official surveys were conducted in a forest area near the village of Markivka (Luhansk region) where insect larvae and damaged ash trees had previously been reported by scientists. Over a total area of 100 ha, phytosanitary inspectors thoroughly examined ash (Fraxinus spp.) trees of different ages, and signs of the pest (e.g. insect galleries) were observed within an area of 5 ha. Insect larvae were collected from symptomatic Fraxinus pennsylvanica trees and sent for diagnosis to the Luhansk Regional Phytosanitary Laboratory which confirmed the identity of the collected specimens as A. planipennis. On 2019-09-16, an infested area (5 ha) was delimited, and phytosanitary measures were implemented to eradicate A. planipennis. During the survey, 50 ash trees had been found to be infested but in order to prevent the possible spread of the pest outside the quarantine zone, all ash trees were destroyed within a radius of 100 m around each infested tree. On 2019-10-11, all infested and surrounding ash trees were felled. Branches were burnt, trunks were further processed and then burnt under the supervision of phytosanitary inspectors. In total, 220 ash trees of various ages (2 to 10-years old) were destroyed. The NPPO also underlined that official surveys for A. planipennis that are regularly conducted across the country have not detected the pest in any other parts of Ukraine.

The pest status of Agrilus planipennis in Ukraine is officially declared as: Transient, actionable, under eradication.